Such a serious title for a blog post, right?
I really hesitated on blogging in light of all of the recent unfortunate events taking place on our farmstead. No one wants to speak the hard truths that come with raising livestock. They want to post the happy pictures of broody hens, thriving livestock and abundant gardens.

But right now, I feel the need to write and maybe those hard truths have to come out. Because it’s just the way things go. There’s highs and lows to raising livestock, just like there are highs and lows to live and you manage them as best you can, learn from them and move on.

A year or so ago, when we moved out here, I spoke about our dream to raise goats. That dream became a reality and at the moment, we have five happy, healthy goats. I call them my kids.

There’s Dusty Bottoms (Alpine), Little Ned (pygmy), and our three Nubians – Abraham, Trixie and Maple. We would have had seven but we lost two. And it was horrible.

Lucky Day was sick when we picked him up from the auction we went to. We didn’t notice it when they brought him into the pen but when we put him in the van to bring him home, he was listless and extremely quiet. We were able to perk him up with some electrolytes and started him on penicillin and he started to eat better, put on weight and started playing with the others. Once off the penicillin though, he started to go downhill again. We kept him inside, kept a heater going beside the kennel he was sleeping in and started him back on penicillin. He didn’t pull out of it, however, and we lost him.

A three weeks later, our beautiful Bliz started crashing. We got her to a vet immediately after I went to check on them one morning and found her standing in the pasture, he head down, and not moving.

The vet gave her fluids and started her on an antibiotic for Coccidiosis. They sent home enough to get our three boys on it as well. For two days, I thought we were out of the woods but then Bliz went down and wouldn’t get back up. I was at work and my husband ran her to the vet who started another medication for pneumonia. When I got home that night it was just in time to be with her in her final moments, petting her floppy ears and crying. As sad as everything was, I was also frustrated. I could keep two human beings alive. How was I struggling so much with keeping goats alive?

Our three remaining boys have been doing fine, however. We have them on rotating pastures to avoid parasitic damage, trace minerals and have given them a large grazing area. And the two girls we’ve introduced seem to be thriving as well. Mapel is our newest and is our bottle baby so I’m being very careful with her, very doting. She’s got a wonderful personality and is extremely friendly. Trixie? Not so much. She’s a little standoffish, almost as if she’s too good for pets and treats. She turns her nose up at both. But she still comes to the fence to say hi and isn’t aggressive at all so I have hopes that even though she may not be all that personable with us, she’ll still be a fine nan to have. She’s patient with the girls, is great with our other goats and absolutely gorgeous. 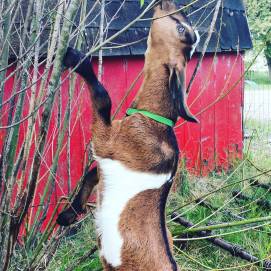 We also added Red Star chicks to the line up – a friendly chicken with above average laying and cold weather hardy. With our buffs, they’d make a great addition. Though I have to say, I’m really partial to Cochins and would love to add more to our roost. Our older Chochin, Henrietta, is very sweet and never makes a fuss when we collect eggs from under her broody butt.

Our 16 Red’s got knocked down to 7 however, when disaster struck again. Something dug into their A-frame and killed several. We set out live traps, at first catching a mommy cat that I made my husband set free – pointing out that cats do not massacre small flocks and leave the bodies just laying around and that there was a good chance, after getting caught and being highly upset about it, that she would not be coming back.

My theory was proven this morning.

We set up more traps, including a live trap in the opening of where this unknown animal had burrowed in, and left the chicks in the A-frame overnight. When I went out to check on them this morning, a skunk was pacing the confines of the live trap.

This, along with the fact that the coyotes are conducting constant nightly performances closer and closer to our house, has pushed the Hubs and I into deciding it’s time to get a guard dog. We’ll be making a two hour drive this Sunday to take a look at some Great Pyrenees pups and possibly put a down payment on one to hold it until it’s ready to go.

It’s a lot to get frustrated over.

I wanted to run a happy farmstead with a all the perks. I didn’t want to have to face down parasitic deaths, wild animals wiping out our flock, etc. We don’t even have a garden going yet this year which is slightly disappointing to me but at the same time, my parents still have their garden, as does our neighbor who’s always inviting us to raid it.

Several people I’ve talked to about our venture have expressed their envy over  what we’re doing. And as wonderful as it is, as much as I smile when I go see the goats in the morning, give Maple her bottle and collect eggs for the day, the hardships have been tough. They’re the reason I have a medical kit now in my kitchen that contains ointments, bandages, syringes, powdered electrolytes, pro-biodics and various other vet supplies to have on hand “just in case.” They’re the reason I have a book on raising goats for dummies. No judgement, folks. Those dummy books really are filled with, hands down, the best information!

I’ll take the good with the bad, however. Because this is still what we want to do, it still makes my heart happy on so many levels. I have girls that want to be in 4-H and show their animals. How cool is that?!

Published by The Writing Mom

Freelance writer, blogger, wife and mom whose days are filled with raising two girls, writing and maintaining a modest farmstead outside of Small Town, Minn. I enjoy writing, reading, blogging and consuming copious amounts of coffee. View all posts by The Writing Mom